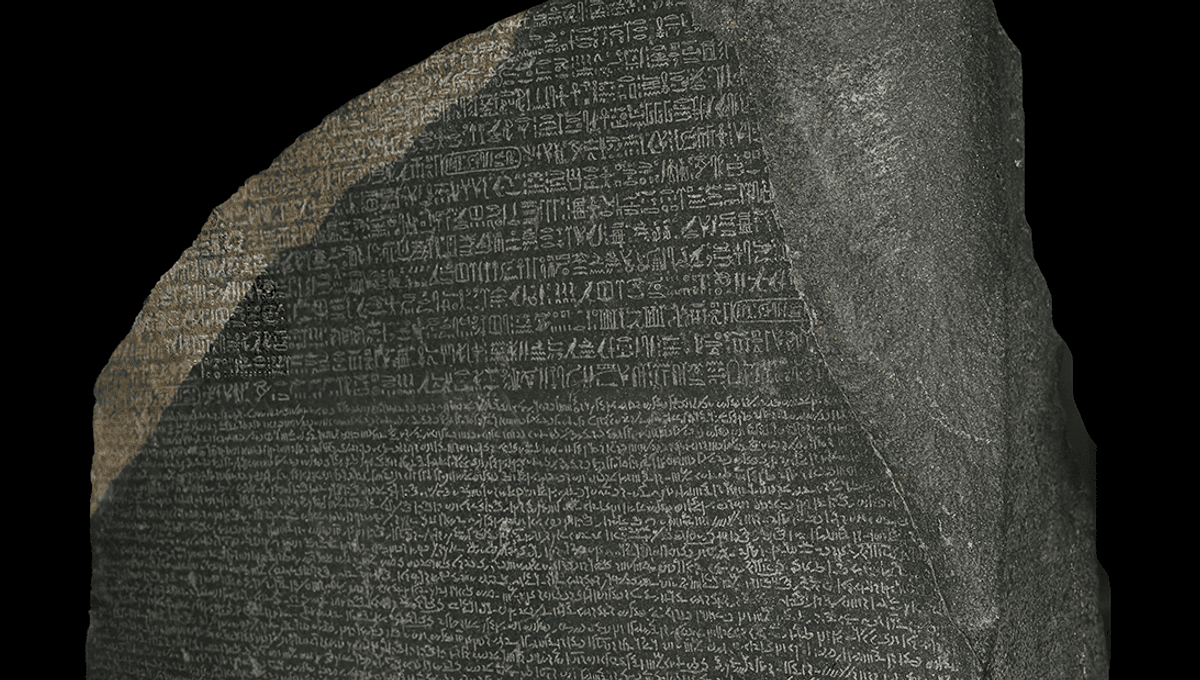 200 years ago today, the world learned that French philologist Jean-Francois Champollion had decoded the Rosetta Stone – an accomplishment that would allow the world to read Ancient Egyptian Hieroglyphics.

In 1799, during a demolition of a fort by one of Napoleon’s lieutenants in Rosetta (modern-day Rashid) in Egypt. a giant slab covered in ancient writing was found underneath the debris. It was first sent to the Institut d’Égypte in Cairo, before – like many ancient artifacts that aren’t British seem to do – making its way to the British Museum at the request of the King.

The slab contains an official message about the king, Ptolemy V, essentially telling the people of Egypt to hail Ptolemy V, “the god who maketh himself manifest, whose deeds are beautiful.”

Important though it is to worship the god who maketh himself manifest, the main value of the broken and incomplete stone lay in the fact it was written in three languages: 53 lines of Ancient Greek, 32 lines in Demotic (a script used in everyday life, translating to “language of the people”), and 14 precious lines of Hieroglyphics.

Until that point, hieroglyphs were basically unreadable. However, using these three (albeit incomplete) versions of the same message, plus other hieroglyphic texts and referencing earlier attempts to decipher hieroglyphics written in Arabic, Champollion was able to decipher the hieroglyphs, finally doing so 23 years after the stone’s discovery.

Shortly afterward, he presented his findings at the Academie des Inscriptions et Belles Lettres in Paris on Friday September 27, 1822, explaining to an audience including his rival that he had deciphered the language of Ancient Egypt, allowing us to learn so much more about the ancient world.

The stone has not been returned to Egypt from the British Museum, despite pressure from the Egyptian government and archaeologists. You can read the full translation of the Rosetta stone here.

Source Link: 200 Years Ago Today, The World Learned The Rosetta Stone Had Been Decoded