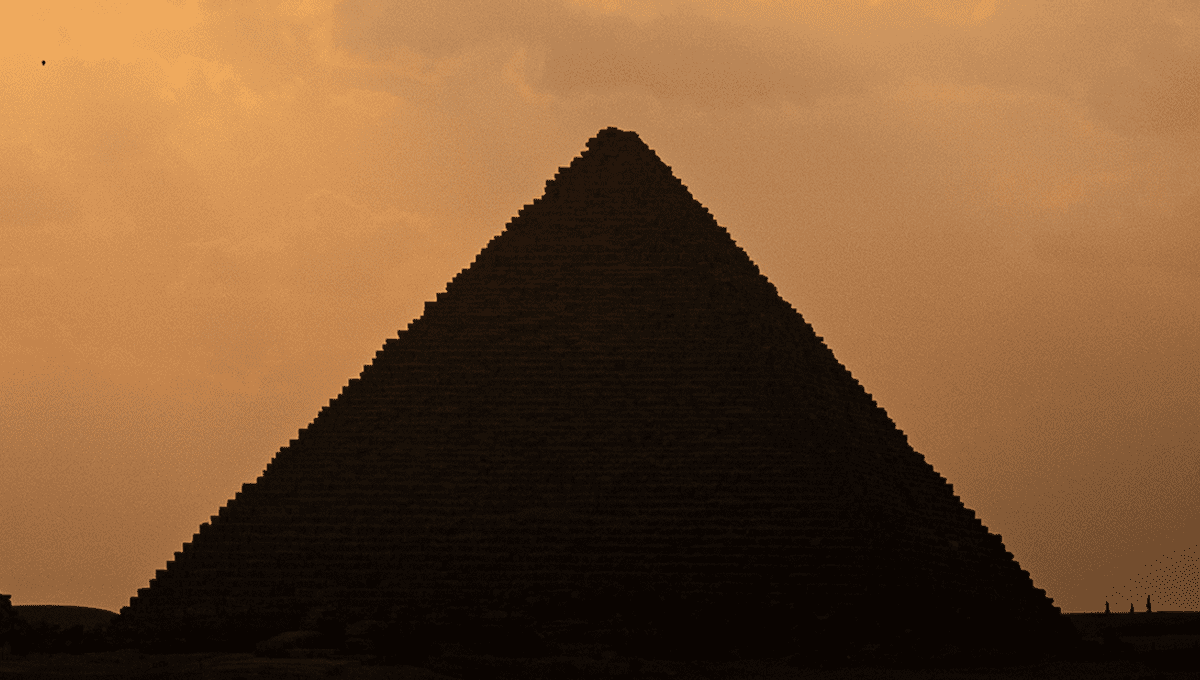 Inside the Great Pyramid Of Giza, there is a massive void. The room, sealed when the pyramid was completed some 4,500 years ago, is of unknown purpose, though some have speculated it could be a secret burial chamber of the pharaoh Khufu, who ordered the pyramid to be built.

In 2017, a team known as ScanPyramids scanned the Great Pyramid of Giza using muon tomography. Muon particles are negatively-charged particles produced by cosmic rays which collide with atoms in the Earth’s upper atmosphere at around 10,000 per square meter per minute.

“Like X-rays, which can penetrate the body and allow bone imaging, these elementary particles can keep a quasi-linear trajectory while going through hundreds of metres of stone before decaying or being absorbed,” the team explains in their study, published in Nature. “By recording the position and the direction of each muon that traverses its detection surface, a muon detector can distinguish cavities from stone.”

All that is to say that they used a very cool way – involving cosmic rays, no less – to look inside the Great Pyramid. And inside, they found a chamber that had never been seen before.

“We report the discovery of a large void (with a cross-section similar to that of the Grand Gallery and a minimum length of 30 metres [98 feet]) situated above the Grand Gallery,” the team wrote. “This constitutes the first major inner structure found in the Great Pyramid since the nineteenth century.”

They named the big void, rather aptly, the “big void”, and it was confirmed using three different muon detection techniques. So far, it is not known what the void was for, though there have been suggestions. Kate Spence, archaeologist at the University of Cambridge, told National Geographic that the void could be a result of how the pyramid was constructed, an internal ramp used to move roof blocks into position, which was then left or filled loosely with rubble.

Another theory as to the room’s purpose is that it was a secret burial chamber of Khufu. When the pyramids were first opened and explored, 19th-century archaeologists found a number of chambers, including one containing a sarcophagus that was thought to contain Khufu himself. However, when the sarcophagus was opened, it was empty.

The remains have long been, and continue to be, presumed to be stolen. However, the theory that there was a secret fourth chamber that contains the mummy of Khufu predates the discovery of the fourth chamber. In 2004, two amateur French Egyptologists, who used ground-penetrating radar and architectural analysis to back up their claims, came up with a theory that there was an extra chamber.

The two argued that the pyramid wasn’t meticulously planned ahead, as believed by most, but evolved as construction went on. Gilles Dormion, the architect of the pair, suggested that the pyramid was adjusted as the builders realized certain chambers would not take the weight of the burial sarcophagus. Giant granite beams are present in the king’s chamber, with large cracks in them that have been attributed to earthquakes since the pyramid was built. However, he believes that the cracks happened during the building of the pyramids, as evidenced by traces of ancient plaster found within them.

“At the end of the day,” Dormion said of the theory in 2004, “the entire problem of the Great Pyramid can be summed up by this theory: Khufu had three funeral chambers built for himself. The first remained unfinished, the second was available and the third cracked. Khufu was therefore interred in the second.”

The amateurs thought that the chamber where Khufu was interred extended from a hidden corridor from the queen’s chamber (a misnomer, as the chamber was likely used as a gift chamber for Khufu), fairly far away from where the big void was subsequently discovered; however, until we get a better look at the void itself it’s perhaps a little too optimistic to assume it is a hidden burial chamber for the king, rather than a ramp used in the pyramid’s construction. Thankfully, a closer look could be on the way.

In 2022, a team announced their plans to image the pyramid using more sophisticated equipment.

“We plan to field a telescope system that has upwards of 100 times the sensitivity of the equipment that has recently been used at the Great Pyramid,” the team writes, “will image muons from nearly all angles and will, for the first time, produce a true tomographic image of such a large structure.”

The team explained that once they have funding, it will take around two years to build the detectors.

Source Link: A Massive Void Has Been Sealed Inside The Great Pyramid Of Giza For 4,500 Years. What's Inside?