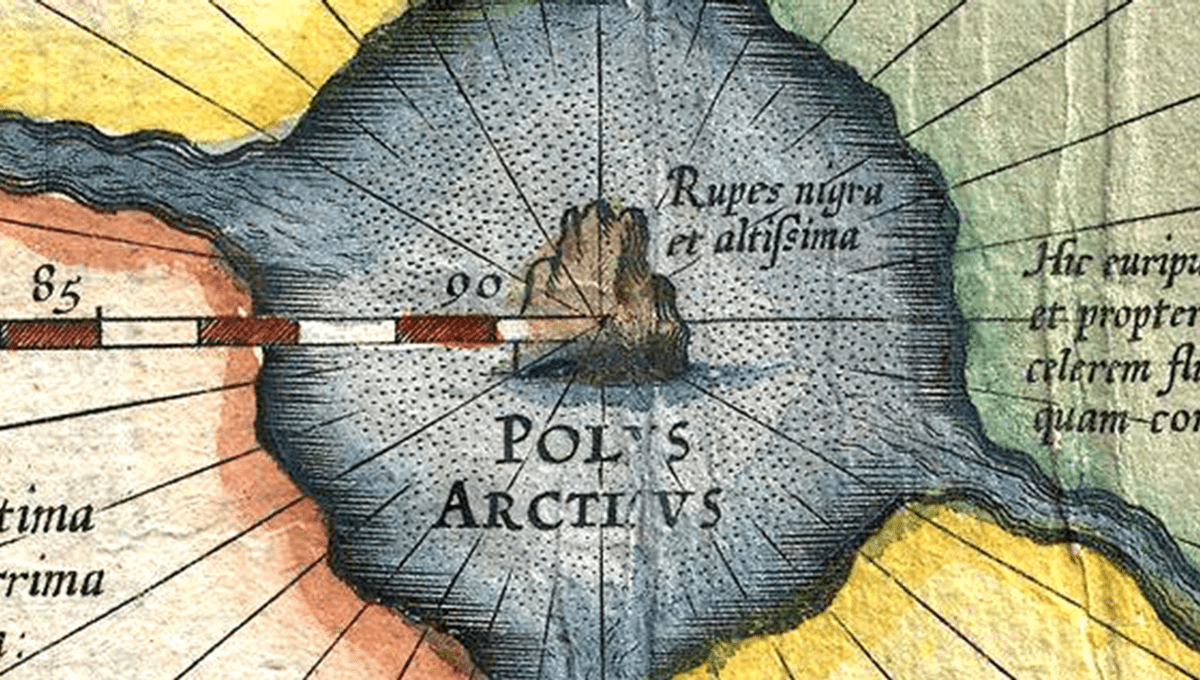 The world map you are likely familiar with is based on the Mercator projection, a revolutionary way of representing the 3D world on a 2D map created by cartographer Gerardus Mercator in 1569. World-changing though the map was, there are a few strange details on there – like a phantom island labeled “Rupes Nigra” (or “black rock”) in the middle of the North Pole.

Ancient maps, to be fair to Mercator, tend to have an array of oddities on them, from sea monsters and mermaids to phantom islands you cannot reach no matter how much you sail at them. Mercator’s island at the north pole is notable for alluding to an old and frankly adorable belief; that compasses were drawn towards the north due to a giant magnet located on the island.

The huge magnet, thought to be 33 leagues (183 kilometers or 113 miles) across, was pictured at the center of Mercator’s map, surrounded by whirlpools. Why not.

“In the midst of the four countries is a Whirl-pool, into which there empty these four indrawing Seas which divide the North,” Mercator wrote in a 1577 letter.

“And the water rushes round and descends into the Earth just as if one were pouring it through a filter funnel. It is four degrees wide on every side of the Pole, that is to say eight degrees altogether. Except that right under the Pole there lies a bare Rock in the midst of the Sea. Its circumference is almost 33 French miles, and it is all of magnetic Stone.”

According to the letter, which recounted earlier tales of the island from a lost book titled Inventio Fortunata (“The Discovery of Fortunata”) from 1360, a priest who had seen the rock described it as high as the clouds. Another sailor written about by Mercator claimed that the rock could be seen from all around the island, and that the island was dead but for the gigantic metallic rock.

“Nothing grows thereon, for there is not so much as a handful of soil on it.”

As misunderstandings go, it’s quite a cute idea. People were attempting to explain why compasses pointed in the same direction, with other explanations being that they were pointing at the north star. The island continued to appear on European maps into the 17th century before discoveries put it to bed.

Despite the one oddity (you put a giant magnetic rock on an imaginary dead island at the north pole and suddenly that’s all anyone wants to talk about), the map is probably the most influential map in history.

It’s a cylindrical map projection, in which you place the globe into a cylinder and then project each point of the map onto a corresponding point on the cylinder. Meridians (imaginary vertical lines going through the Earth from the North to South pole) are mapped onto vertical lines equally spaced apart on the map, and circles of latitude (imaginary horizontal lines from East to West) are mapped onto equally spaced horizontal lines.

The Mercator projection is good for navigation because it represents courses of constant bearing as straight segments, meaning ships have to course correct for the curvature of the Earth less frequently.

In cylindrical maps – as is the case with the Mercator projection and the many modern maps based on it – areas around the equator remain roughly accurate. However, the further you move from the equator, the more distorted and inflated landmasses become. Essentially, this is why Greenland appears gigantic and is represented as the same size as Africa, when in fact it’s 1/14 as big.

Source Link: Before We Knew About The Magnetic Field, People Had An Adorable Explanation For Why Compasses Worked