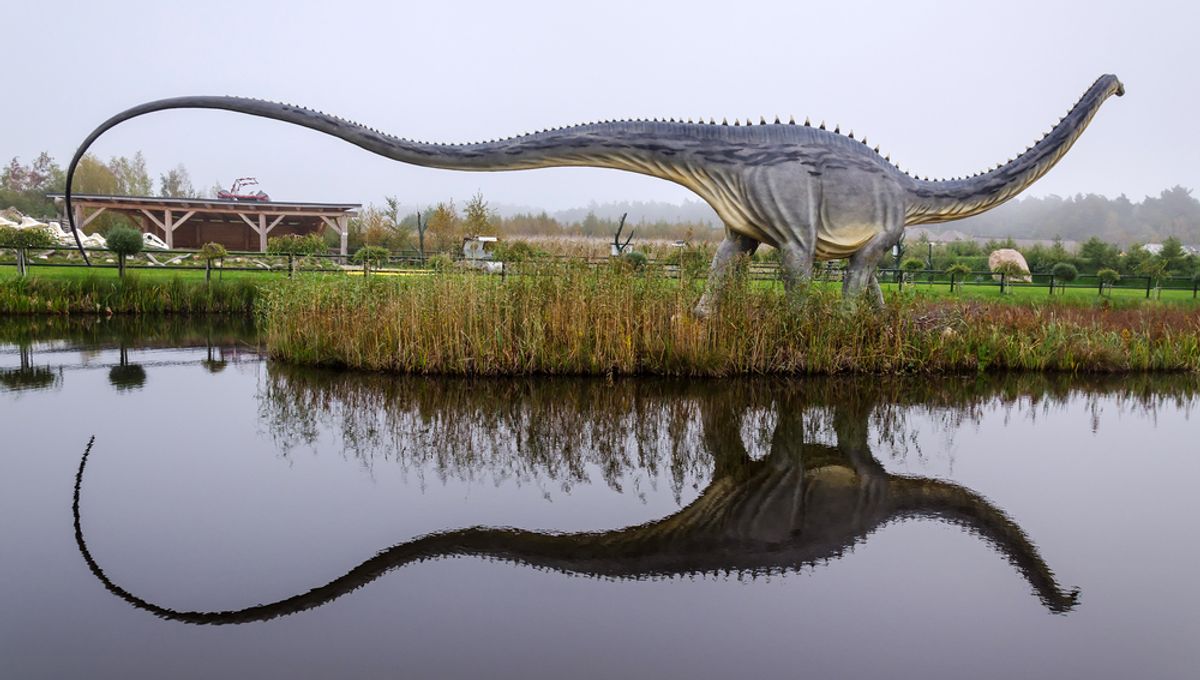 The late Jurassic was a dangerous time, even if you weighed 20 tonnes, so everyone needed a weapon. The giant sauropods known as diplodocids are thought to have had one in the form of their tail, but just how fast could those tails move?

Twenty-five years ago, early computer models of an Apatosaurus louisae tail suggested it could crack like the fall on a bullwhip, breaking the sound barrier to create a small sonic boom. Researchers thought this might be a widespread characteristic among slender-tailed sauropods. Whether or not the sound would have deterred predators or been used as a communication device, it would at least have made these giant sauropods even cooler to our ears.

Computer modeling has advanced a long way since 1997, so Simone Conti, a PhD student at NOVA School of Science and Technology decided to take a more sophisticated look. Alas, the modeling Conti and co-authors announce in a study in Scientific Reports reveals that Apatosaurus tails couldn’t get even close to the speed required to produce a sonic crack, and nor could any of their fellow diplodocids – a group that includes such famous members as Brontosaurus and Diplodocus. They probably could, however, have given a nasty sting that might have discouraged even a thick-skinned tyrannosaur from taking a bite.

Conti used five diplodocid specimens to create a model of a typical sauropod tail. At 12 meters (39 feet) long and weighing 1.44 tonnes, the result is certainly fearsome. The 82 vertebrae, modeled using cylinders, create considerable flexibility and allow its tip to move at 30 meters per second (67 miles per hour).

Threatening as that is, it’s just a tenth of the speed of sound. Although sound’s velocity in a gas depends on temperature and composition, the air hasn’t changed that much in the last 100 million years or so. Even these speeds would require the tail to be quite stiff, with strong tendons to support the bones.

When the team tried making their tail move at the 340 m/s required by the sonic boom hypothesis, it broke. Even when they added soft tissue “poppers” to perform an equivalent role to a bullwhip’s fall, they found Chuck Yeager didn’t need to be worried about having been beaten by a dinosaur’s rear end.

Although we do not have a complete tail from any diplodocid, we do have many partial tails, none of which include appendages suited to cracking. Therefore, any appendage must have been composed of something that rarely fossilized. The authors tried three versions, made respectively of skin and keratin (the substance that makes up hair and nails), braided strands of keratin, and soft tissues. None of them could get close to breaking the sound barrier. Indeed, the air resistance created by the popper would make it harder for the tail to achieve high speeds.

Quite a few other uses have been proposed for sauropod tails, some of which have already been disproved. Remaining possibilities, besides their roles as weapons, include counterbalances for the long necks and a way for dinosaurs to feel out their surroundings without needing to turn around.