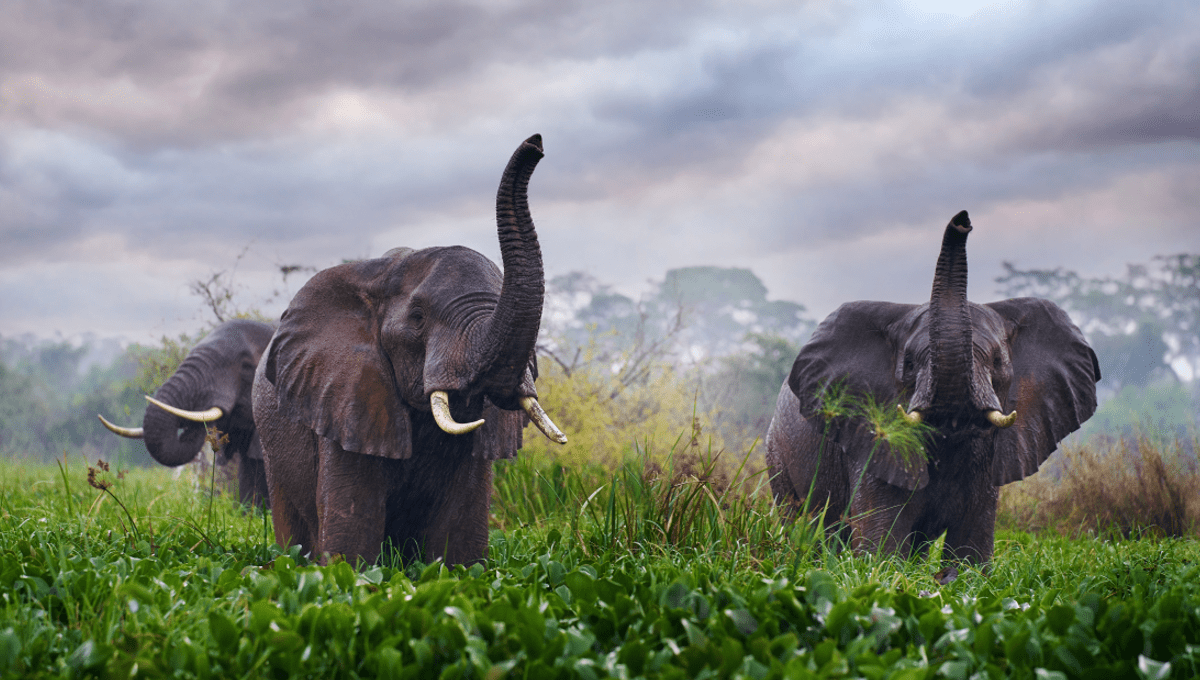 Elephants are natural eco-warriors that sequester carbon, so protecting their numbers is vital for the environment as well as their species. The carbon offsetting capacity of elephants has long been overlooked as a tool in our arsenal against the climate crisis – but now, new research is reporting on the pivotal influence of African elephants on forest ecosystems.

Elephants naturally contribute towards greater sequestration of carbon, something crucial to preventing further warming on Earth. However, with their numbers plummeting over 80 percent in the last ~30 years, we could soon lose this vital environmental stabilizer.

Not wanting elephants to go extinct is an argument most people can get behind, but as history has proven, simply enjoying their existence and demonstrating their importance to maintaining a biodiverse world hasn’t been enough to drive action. Now, researchers hope that by reimagining the wild elephant population in terms of how they could make or break our fight for the planet might finally turn the heads of those with the power to make big changes.

“We can now add the robust conclusion that if we lose forest elephants, we will be doing a global disservice to climate change mitigation,” said senior author of a new paper and Assistant professor of biology at Saint Louis University, Dr Stephen Blake, in a statement. “The importance of forest elephants for climate mitigation must be taken seriously by policy makers to generate the support needed for elephant conservation. The role of forest elephants in our global environment is too important to ignore.”

How elephants shape the environment

Elephants have been found to be quite choosy when it comes to foraging, selecting smaller plants and trees to rip to shreds for food. Curiously, these modestly-sized plant species are also low carbon density, meaning they grow quickly and compete for resources but actually do little in the way of storing carbon. High carbon density trees are bigger, grow slower, and sequester more carbon from the environment by taking CO2 and transforming it into biomass through photosynthesis.

By selectively munching on the smaller plants and trees that do little for the planet while competing with more environmentally beneficial species, elephants effectively thin the forest in the same way that human foresters do, promoting the growth of some plants and trees over others. This results in the highest carbon-store trees flourishing, which is good news for everyone.

Elephants are also the gardeners of the forest, walking around eating fruits that turn into seeds and fertilizer in their digestive systems. This nutritious blend is carried around the forest in their stomachs so that they can later be dispersed as dung that’s traveled far from the parent trees. That dung then morphs into some of the biggest tree species in the forest, further contributing to the value of forest habitats as carbon stores.

What if we lose the elephants

Beyond Trophy Hunting, a talk recently hosted by the Born Free Foundation, saw a panel of experts discuss the many ways in which natural Earth technologies – like the carbon sequestration potential of elephants – are under threat from both illegal killing and the trophy hunting industry. If we are too slow to act on these threats, we could lose elephants– and with them, they’ll take the environmental service the species has been providing for the planet free-of-charge for millennia.

“Ten million elephants once roamed across Africa, and now there are less than 500,000, with most populations living in isolated pockets,” Blake continued. “These elephants range from endangered to critically endangered, with their numbers plummeting by more than 80 percent in the last 30-plus years.”

“Now we have a choice. As a global society, we can continue to hunt these highly social and intelligent animals and watch them become extinct, or we can find ways to stop this illegal activity.”

“Save the elephants and help save the planet, it really is that simple.”

The study was published in PNAS.