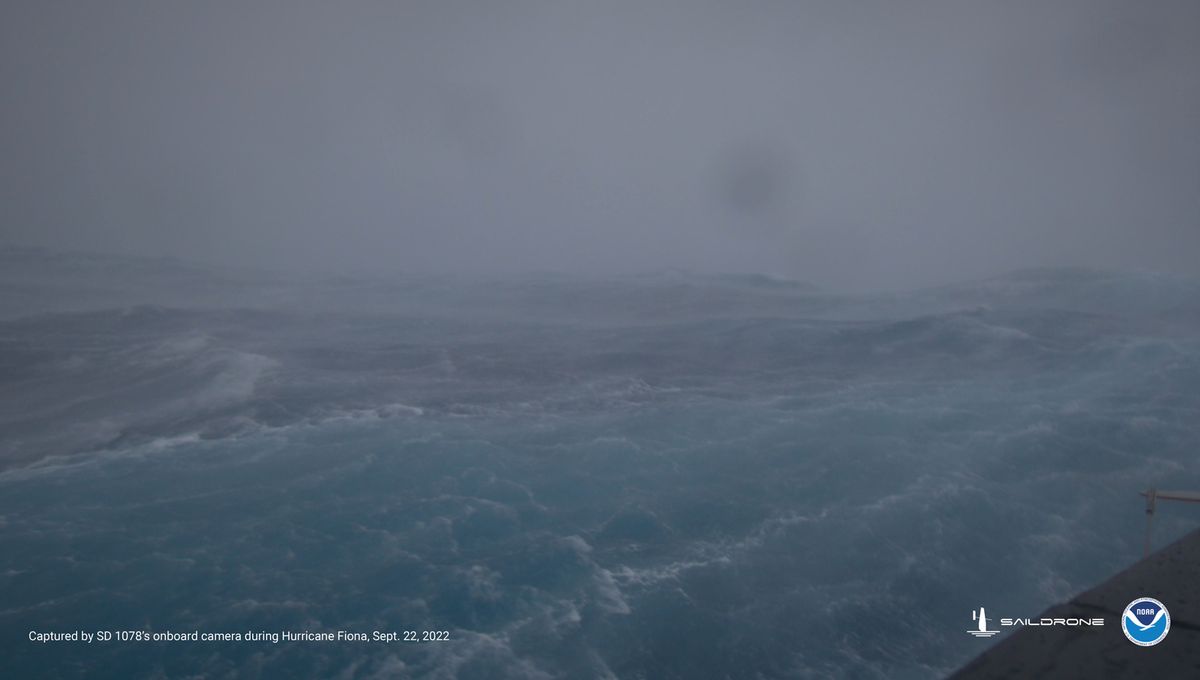 To put it mildly, it’s been a weird hurricane season. Despite predictions that La Niña would cause more frequent storms, the Atlantic has had only six named storms so far compared to 21 storms in 2021 and 2020’s total of 30.

Hurricane Fiona is the first category 4 storm of the 2022 Atlantic hurricane season. Recently, it has wreaked havoc over Puerto Rico and the Dominican Republic, leaving at least eight people dead and many homes destroyed. Fiona is now on a collision course with the east coast of Canada, though she is predicted to be losing some of her ferocity along the way.

Footage released from an uncrewed surface vehicle (USV) called the Saildrone Explorer SD 1078 shows what it’s like to travel in the heart of the hurricane.

The Saildrone Explorer SD 1078 was sent into the middle of Hurricane Fiona, contending with 15 meter (50-foot) waves and wind speeds of 160 kilometers per hour (100 miles per hour). Three other Saildrone USVs also recorded data from the storm before it was upgraded to a Category 4.

SD 1078 is now 315 nautical miles southwest of Bermuda where Hurricane Fiona is expected to travel past. It is one of seven hurricane Saildrones that are deployed in the Atlantic Ocean and the Gulf of Mexico to collect data and offer a completely new perspective on one of the most powerful destructive forces on Earth. The data they collect is vital to improving storm forecasting and helps to reduce the loss of human life by helping coastal communities better prepare for these devastating storm events.

“These exciting emerging technologies provide [the National Oceanic and Atmospheric Administration] with another valuable tool that can collect data in places we can’t get to with other observing systems,” said Captain Philip Hall, director of NOAA’s Uncrewed Systems Operations Center, in a statement.

Hurricanes form when moist air over warm ocean water rises, creating an area of lower air pressure below. Air from surrounding areas with higher pressure pushes into the low-pressure area. This warms the air, which also rises. The whole process continues as more air rises, and more air swirls beneath to take its place. The air at the top cools as it rises, forming clouds and thunderstorms. Once the winds reach 120 km/h (74 mph) the storm has officially become a hurricane.

The names “hurricane” and “tropical cyclone” mean the same thing: a rotating system of clouds that has formed over tropical waters. “Hurricane” is used when these storms form over the North Atlantic or Northeast Pacific.

Due to a neat phenomenon known as the Coriolis effect, air drawn into the center of a hurricane moves to the right in the Northern Hemisphere – meaning the storm seems to rotate counterclockwise – and to the left in the Southern Hemisphere – as a result, the storm seems to rotate clockwise. This is caused by the Earth rotating faster at the Equator than it does at the poles.