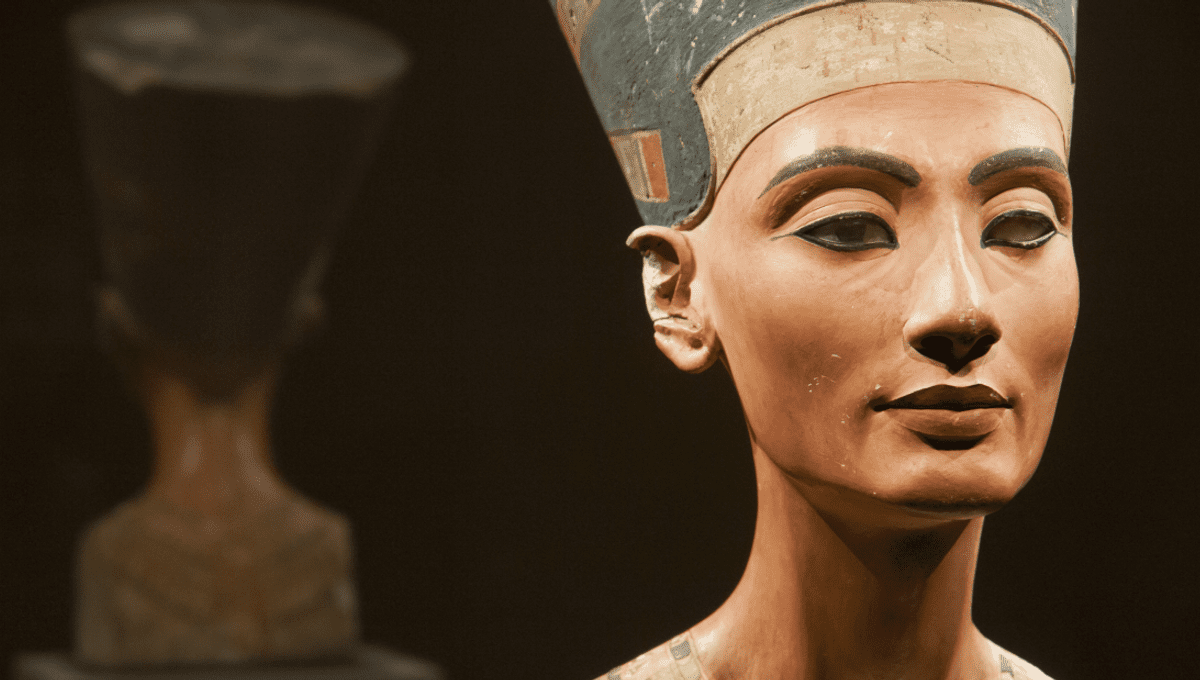 For 3,300 years, Neferneferuaten Nefertiti has remained hidden from the wanting eyes of Egyptology. Her existence was confirmed after a bust of the queen of the 18th Dynasty of Ancient Egypt was discovered in 1912, but despite enduring interest around Nefertiti (whose name means “the beautiful woman has arrived”) she has failed to make an appearance.

Now, fresh rumors of her location are circulating following the reported discovery of hidden hieroglyphics in the tomb of her stepson, Tutankhamun, and some unnamed mummies. Tutankhamun’s remains were first discovered almost a century ago on November 4, 1922, in a tomb that has been touted as a potential hiding space for Nefertiti on several occasions.

In 2015, a paper titled “The Burial of Queen Nefertiti?” referenced high-resolution images that were believed to reveal the location of hidden doors within the tomb. This theory was later supported by distinct lines observed on the ceiling of the tomb, which led researchers to believe one of the “rooms” was actually a corridor, sealed off by a false wall. But as technological advances continue to change the way we practice archaeology, the convictions of this “hidden chamber” continue to waiver.

In 2020, the outcome of ground-penetrating radar (GPR) used to scan the area surrounding Tutankhamun’s tomb was published in Nature. Initial reports indicated that they had identified a previously unknown corridor-like space a few meters from the burial chamber, which might explain why King Tut’s tomb is comparatively quite small for a member of Egyptian royalty.

This latest flurry of excitement around Nefertiti’s location also centers around King Tut’s tomb. Here, researchers believe that cartouches within the tomb that show Ay, Tutankhamun’s successor, burying the young pharaoh (who was just 19 when he died) could be concealing an earlier image. According to former curator in the British Museum’s Department of Egyptian Antiquities, Nicholas Reeves, it may have been painted over a similar cartouche showing Tutankhamun burying Nefertiti.

“Close inspection of Ay’s cartouches reveals clear, underlying traces of an earlier name – that of Tutankhamun. In its original version, this scene had shown Tutankhamun performing the funerary ritual for the tomb’s original owner, his immediate predecessor… Nefertiti.”

If proven to be true, it could indicate that what we know to be Tutankhamun’s tomb is merely one layer of a much vaster funerary home built to house Nefertiti and adapted to make room for the King following his untimely death.

Incredibly, that’s not the only bit of Nefertiti news doing the rounds. Zahi Hawass, the previous Minister of State for Antiquities Affairs in Egypt, has also spoken out about the discovery of several unnamed mummies, one of which he believes could be Nefertiti.

“In October we will be able to announce the discovery of the mummy of Ankhesenamun, Tutankhamun’s wife, and her mother, Nefertiti,” Hawass told Spanish newspaper The Independent. They are awaiting DNA testing.

While this “discovery” marks the fourth alleged in seven years, it lands at a serendipitous time with the centenary of Tutankhamun’s tomb just a month away. While it pays to be cautious in the face of breakthroughs that sit in “rewrite the textbooks” territory, we should know one way or the other very soon.