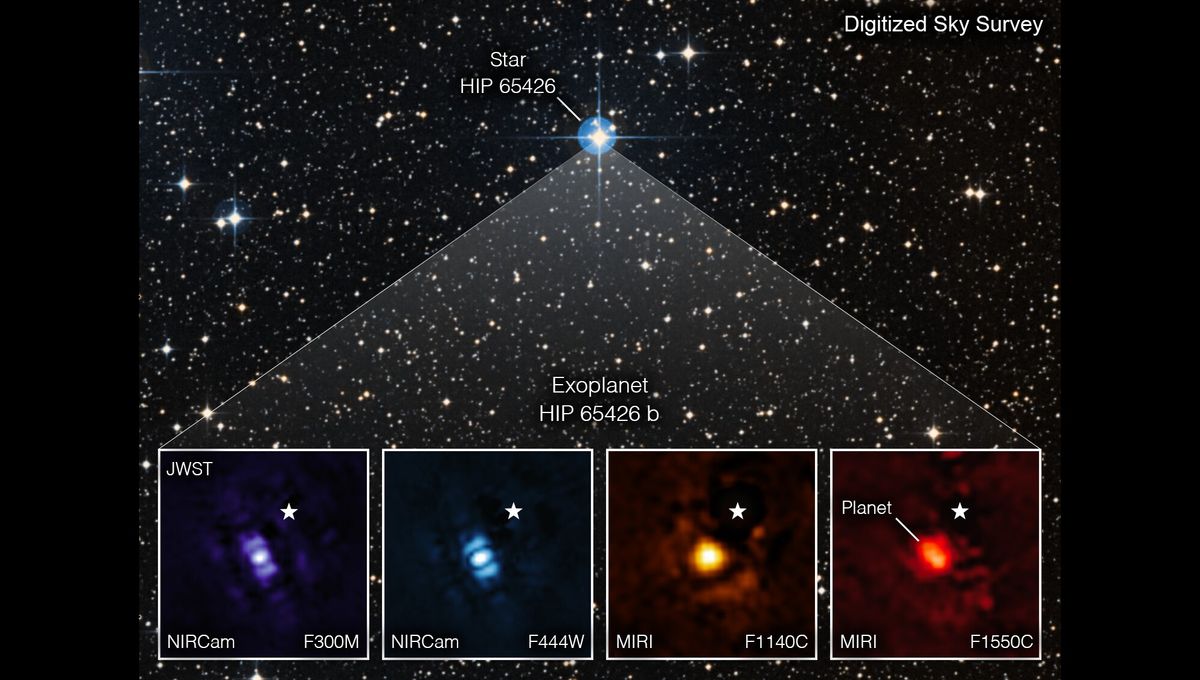 Astronomers report the first image of an exoplanet captured by JWST, and it’s a very weird world. The ground-breaking telescope is said to have exceeded expected performances by a factor of 10. It’s already demonstrated that it can study exoplanets’ atmospheres as they pass in front of their stars, and now it’s shown it can directly image exoplanets.

The world in question is called HIP 65426b and it’s truly puzzling. Previous claims said it shouldn’t exist as it doesn’t fit our models of exoplanets (planets outside the Solar System), so observations of it are crucial to help astronomers develop better ones.

Firstly, it orbits a very young star that has a mass twice our Sun and spins very fast on its axis. It takes just over three hours for a full rotation compared to the 28 days of our Sun. That’s 150 times faster. Also, despite being a star between 15 and 20 million years old it has no disk around it from which planets can form. And that’s just the first part of the mystery.

HIP 65426b is located about 92 AU from its star, with 1 AU (astronomical unit) being the Earth-Sun distance. That’s three times further out than Neptune. And yet the planet, which is now estimated to weigh about seven times that of Jupiter, is hot with a temperature of about 1,000°C (1,800°F).

A proposed scenario is that the planet formed with siblings closer to the star, quickly making the disk disappear, and then through a gravitational tug-of-war, it ended up here and the siblings were lost, An alternative scenario sees the star and the planet forming together and the star hoarding most of the material, stopping the planet from getting any bigger and turning into a brown dwarf or a star.

A paper on this first-ever image of an exoplanet from JWST has been submitted to the AAS journal and is currently available to read on the online repository ArXiv. In infrared, the wavelength that JWST uses, the planet is between 1,000 (near infrared) to 100 (mid-infrared) times fainter than its star. So it is incredible that the telescope can see it so clearly.

And while this study doesn’t have a definite answer about the origin of this peculiar world, it shows what an asset JWST will be for studying exoplanets. Given the right star, the team believes that a planet smaller than Saturn and with a similar orbit should be visible to the space telescope.

If you don’t think HIP 65426b is a great name for such an unusual planet, worry not. The International Astronomical Union is currently asking members of the public to submit proposals for new names for this and many other worlds as we write.

Source Link: JWST Snaps Its First Image Of An Exoplanet – And It’s A Very Weird World