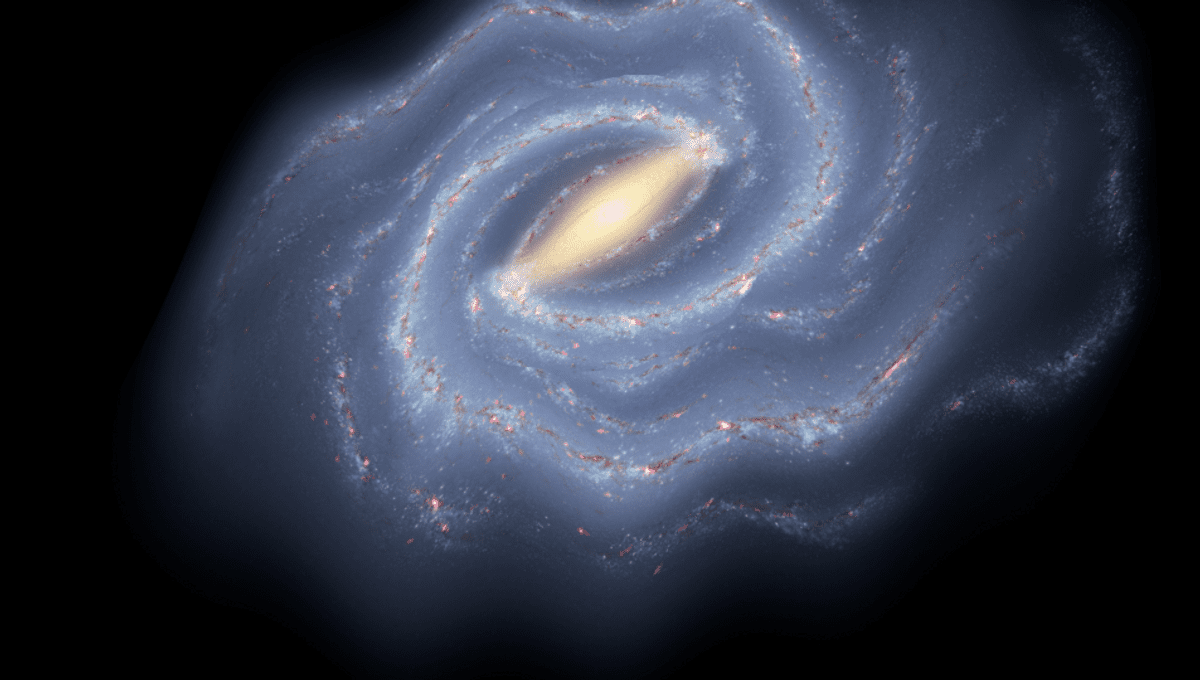 Our galaxy has been shaped by its encounters with many smaller galaxies over billions of years. It absorbed some, but even some of those that escaped have left their mark. Parts of the galactic disk have been found to be vibrating as a result of a close (galactically speaking) encounter with the Sagittarius Dwarf Galaxy.

Stars move for many reasons, including to orbit the center of the galaxy or from being too close to a supernova. The extraordinary precision of the Gaia space telescope has allowed us to discover another reason. There are parts of the galaxy where groups of stars display synchronized movements perpendicular to the galactic plane, indicating some force has stirred them up.

A study in Monthly Notices of the Royal Astronomical Society shows this pattern is surprisingly widespread in the outer disk and provides an explanation.

“We can see that these stars wobble and move up and down at different speeds,” said Dr Paul McMillan of the Lund Observatory in a statement.“When the dwarf galaxy Sagittarius passed the Milky Way it created wave motions in our galaxy, a little bit like when a stone is dropped into a pond.”

McMillan and coauthors used the Gaia data to measure the movements of stars over much wider swathes of the galaxy than had been possible before. This revealed a widespread pattern, which the authors think could only be the result of the Sagittarius galaxy. They’ve used the distribution of ripples to calculate the dwarf galaxy’s path and timing.

“We can study the Milky Way in the same way the geologists draw conclusions about the structure of the Earth from seismic waves that travel through it,” McMillan said. Indeed, the paper refers to their work as “Galactoseismology”, noting it differs from the original seismology because the galactic oscillations take place over millions of years, not a few hours.

“At the moment, Sagittarius is slowly being torn apart, but 1-2 billion years ago it was significantly larger, probably about 20 percent of the mass of the Milky Way’s disk,” McMillan noted.

The disruption caused by the Sagittarius dwarf galaxy was first reported in 2018, but that was for a narrow zone directly opposite the center of the galaxy from our perspective. This work shows the effect is far wider, taking in around 80 degrees of the sky.

Although it is probably the closest galaxy to our own, the Sagittarius Dwarf Galaxy was only discovered in 1994 because, from our perspective, it is on the other side of the galactic center and partially hidden. The more we have studied it, however, the more its importance has grown. On a previous passage, it may have triggered the Sun’s formation.

The paper is published in Monthly Notices of the Royal Astronomical Society.

Source Link: Passing Dwarf Galaxy Made Milky Way’s Stars Bob Up And Down