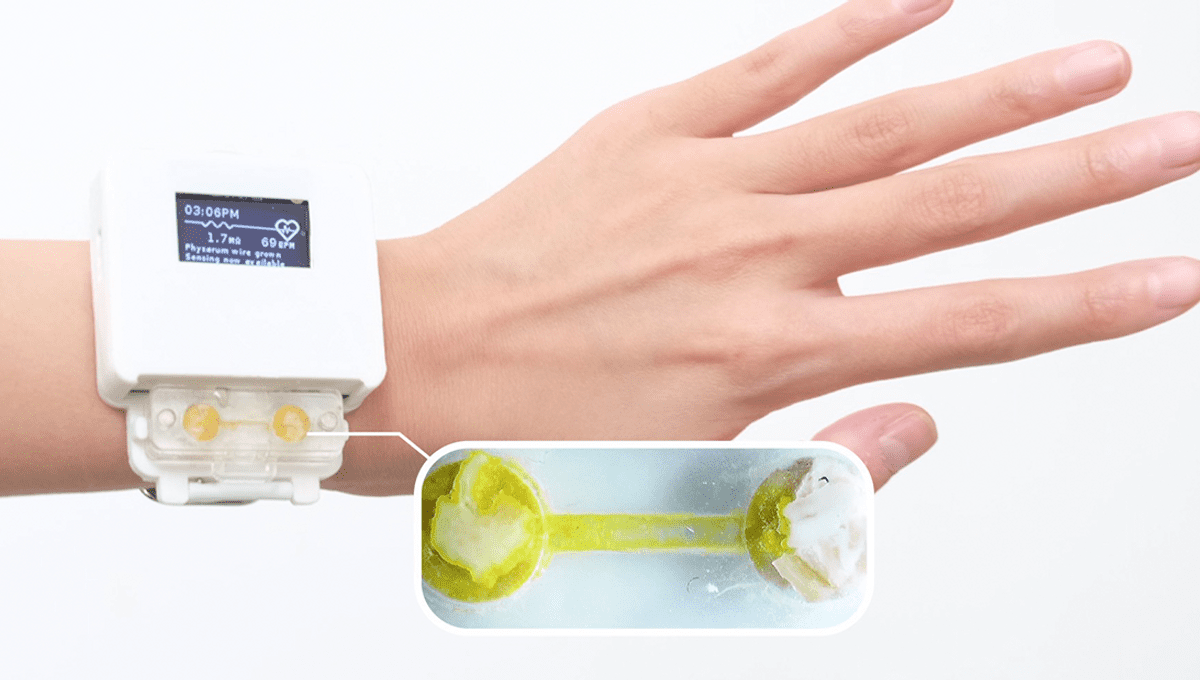 If you ever spent your lunch break at school caring for a Tamagotchi then be prepared, as new research takes this concept one step further. Researchers were keen to look at people’s attitudes around care by using an interactive device like a smartwatch. Studies like these are normally done with virtual needs, such as caring for a virtual pet. Now, the team at the University of Chicago are exploring people’s attitudes to physical care in relation to an interactive device.

A new kind of smartwatch has been engineered with a special living component. By taking care of a living organism within the watch, feeding it a mixture of water and oats, users can enable the slime mold (Physarum polycephalum) to grow, forming a living wire that in turn enables a heart rate sensor.

Failure to provide adequate care for the mold means the heart rate sensor is disabled and the mold dries up. The mold can also enter a dormant state when not fed, allowing the user to bring it back months or even years later.

The idea behind this is that by developing a more caring attitude to the device, this might extend its lifespan, helping to reduce waste. A total of 53.6 million metric tonnes of electronic waste was recorded in 2019; by influencing people’s attitudes around how they care for electronics like smartwatches, the researchers hope this will convince people to keep their devices for longer.

The researchers gave their living smartwatch to a group of five people to test out for 9-11 days. In the first half of the time they asked the group to care for the slime mold so it could grow and establish the function as a heart rate sensor. In the second half the participants were asked to stop caring for the mold. During the experiment, the participants were asked to write about their relationship with the device in daily update forms and via interview questions.

“When discussing their experiences with normal smartwatches, Fitbits, or other wearable devices, people said they just used it for an explicit purpose. And with this device, it felt more like a bi-directional relationship because they had to care for it. They also had some sort of attachment to it because it’s living, and they felt like they couldn’t throw it away, or just put it in the closet,” said Jasmine Lu, lead author of the study, in a statement.

The team found that the participants felt a greater sense of responsibility and developed a reciprocal relationship with the device, with some even going so far as to name their slime mold. All participants felt either sadness or guilt in the neglecting stage of the experiment.

The participants had mixed responses when asked if they would consider wearing a device like this long term, and most suggested they would pass the device onto someone else, rather than throw it away, if they no longer wanted to keep it.

The paper is published in the proceedings of The 35th Annual ACM Symposium on User Interface Software and Technology.

Source Link: Smartwatch Powered By Slime Mold Is Like Having A Tamagotchi On Your Wrist