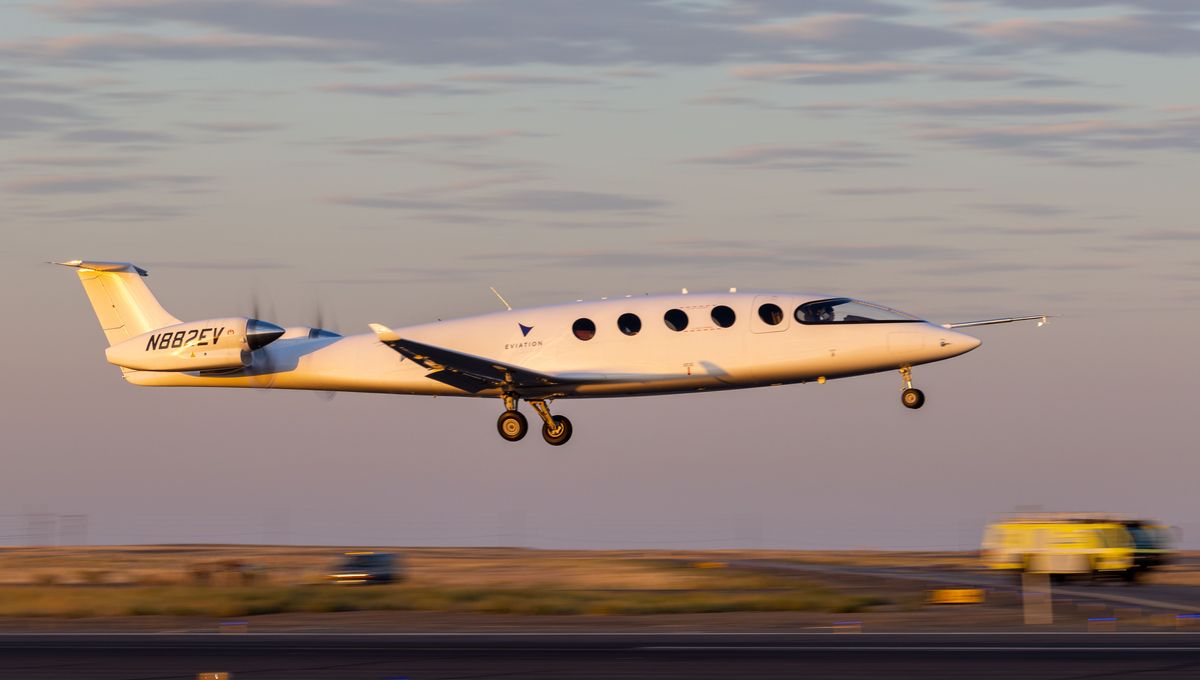 A prototype electric passenger aircraft hit the skies for the first time this week, quietly jetting off from Grant County International Airport in Washington state on a short trip with nine passengers onboard.

Dubbed Alice, the plane is the brainchild of the Washington-based aerial engineering company Eviation. Powered by two magni650 electric propulsion units, it can reach a top speed of 481 kilometers per hour (298 miles per hour) without producing any carbon emissions. Since there are no jet engines or fossil fuels, it’s also way quieter and cheaper to fly than a conventional aircraft.

For its maiden voyage, the all-electric plane set off at 7:10 am local time on Tuesday for a test flight that saw it fly for 8 minutes at an altitude of 1,066 meters (3,500 feet) before landing back at the airport in Grant County.

Eviation says the purpose of the flight was to harvest “invaluable data” that will help them optimize the aircraft for commercial production. There’s still a long way to go before all-electric planes are transporting travelers to their holiday destinations, but steps towards this goal are being taken.

“Today we embark on the next era of aviation – we have successfully electrified the skies with the unforgettable first flight of Alice,” Gregory Davis, Eviation President and CEO, said in a statement.

“People now know what affordable, clean, and sustainable aviation looks and sounds like for the first time in a fixed-wing, all-electric aircraft. This ground-breaking milestone will lead innovation in sustainable air travel, and shape both passenger and cargo travel in the future.”

Considering how important air travel is in the globalized world, the need for all-electric planes is clear. Aviation accounts for around 2.5 percent of global carbon emissions. However, it also contributes to climate change in a number of more complex ways, such as the release of other gases and the production of water vapor trails in the sky. As a result, flying accounts for roughly 5 percent of the human-induced warming of the planet.

There have been some advances in electric plane technology in recent years, but the industry has failed to get off the ground, so to speak. Eviation, however, believes the market has arrived.

“The first flight of Alice confirms our belief that the era of sustainable aviation is here. With our order of 12 Alice e-cargo planes, we are investing towards our overall goal of zero-emissions logistics,” said Geoff Kehr, Senior Vice President of Global Air Fleet Management at DHL Express.

“Alice is the true game-changer by enabling long-distance air transport for the first time with zero emissions. This historic flight marks a significant milestone on our journey to ultimately achieving net-zero emissions by 2050.”