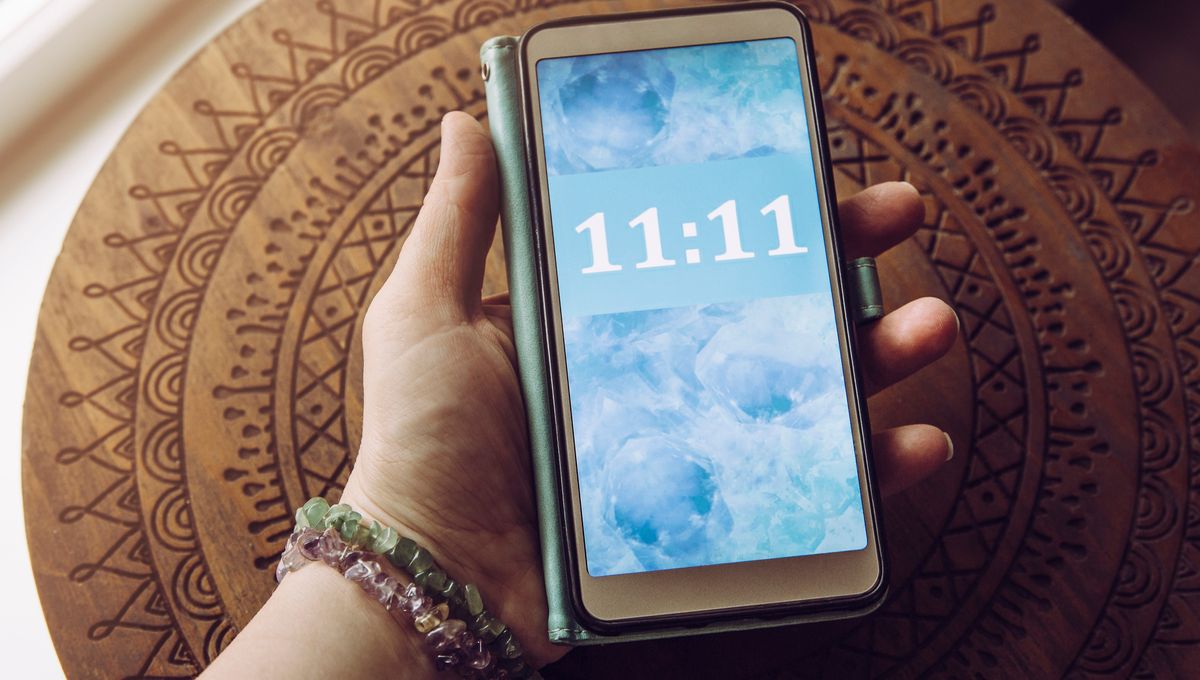 There are lots of different names given to numbers in math. There are prime numbers, obviously, and square numbers; triangle and cube numbers; perfect numbers, practical numbers, and sublime numbers. Numbers can be polite, happy, evil or odious; there are lucky numbers and fortunate numbers; they can be amicable, sociable, betrothed, or untouchable.

But there’s one type of number you’re more likely to see in a weekend magazine than a textbook: angel numbers. Unlike the strictly-defined integers of math, angel number enthusiasts describe them as “sequences (usually three or four numbers) that contain repetition (such as 111 or 4444) and/or patterns (such as 321 or 8787). Although they may appear in the most ordinary places, these digits usually grab our attention and – even if for only a moment – evoke a sense of wonder.”

It’s a pretty rough and open definition – which is why (we hate to break it to you) there’s no science behind the concept of “angel numbers” whatsoever. It’s not math, but numerology: about as scientific as looking for meaning in cloud formations or chicken guts.

Just because “angel numbers” have no scientific basis, doesn’t mean there’s nothing interesting going on behind the phenomenon. The real explanation for angel numbers, though, doesn’t lie in math, but psychology: it’s a manifestation of the very real and scientifically backed effect known as apophenia.

“Apophenia is an error of perception: The tendency to interpret random patterns as meaningful,” explains John W. Hoopes, Professor of Social and Behavioral Sciences Anthropology at the University of Kansas, in an article for Psychology Today dated 11/11/11.

“Pareidolia is visual apophenia. An example would be seeing the face of Jesus on a grilled cheese sandwich, the Virgin Mary in a water stain on the subway wall, the Man in the Moon, or faces in the clouds,” he writes. “When a photo of the World Trade Center Twin Towers makes you assign special significance to ‘11,’ that’s [apophenia]. When something indistinct in the sky is interpreted as an extraterrestrial spacecraft, that’s also [apophenia].”

But apophenia isn’t just what makes us see dopey grins and cat butts on extraterrestrial planets. Astrology, for example, is a prime example of the phenomenon: from seeing patterns that don’t exist based on people’s time and date of birth, to seeing “pictures” in the sky formed by completely random stars that, in reality, are hundreds of light-years from each other, it’s hard to think of any aspect of the hobby which isn’t based on apophenia.

And this simple error in thinking can have more serious impacts than whether we read our horoscopes or not. More than one person out there has lost their livelihoods to gambling – another area where apophenia is rife: not for nothing is one of the more infamous examples of the phenomenon known as the “gambler’s fallacy.”

“The ‘gambler’s fallacy’ [is] a worryingly common error that can derail many of our professional decisions, from a goalkeeper’s responses to penalty shootouts in football to stock market investments and even judicial rulings on new asylum cases,” writes David Robson in a 2020 article for the BBC. It is, basically, the mistaken belief that a certain outcome – one that, logically, you know comes down to random chance – is just bound to happen sometime soon.

“[In 2005], the people of Italy experienced a strange kind of mass hysteria known as ‘53 fever,” Robson explains by way of example. “The madness centered on the country’s lottery…Sometime in 2003…the number 53 simply stopped coming up on the Venice wheel – leading punters to place increasingly big bets on the number in the certainty that it must soon make a reappearance.”

“By early 2005, 53 fever had apparently led thousands to their financial ruin, the pain of which resulted in a spate of suicides,” he continues. “The hysteria only died away when it finally came up in the 9 February draw, after 182 no-shows and four billion euros worth of bets.”

Why do we experience apophenia?

So, if apophenia causes such big problems, why do we even have it? After all, it’s hard to see an evolutionary benefit to gambling away our life savings based on a gut feeling that the laws of math and physics have stopped applying temporarily.

But as dangerous as it is in the modern world, there’s a pretty good reason we’re wired to see these patterns. “The brain has evolved a fantastic capacity to find meanings and connections,” explains Barry Markovsky, Distinguished Professor Emeritus of Sociology at the University of South Carolina, in an article for The Conversation.

“Doing so once meant the difference between survival and death,” he writes. “Recognizing paw prints in the soil, for example, signified dangerous predators to be avoided, or prey to be captured and consumed. Changes in daylight indicated when to plant crops and when to harvest them.”

Even today, when it works out, pattern recognition is an extremely important part of life. Not just for things like spotting when food has gone off, or whether a particular expression from some guy at a bar is likely to lead to a smooch or a punch in the face – it’s also what underpins modern computing and AI. It even forms the basis of our bodies’ immune responses.

And for a real example of how a perfectly reasonable survival response can turn into full-blown apophenia, look no further than B. F. Skinner’s superstitious pigeons: in a now-infamous 1948 experiment, the psychologist and social philosopher put hungry pigeons in cages, offering them food at regular intervals, but only for a few seconds at a time. As the pigeons grew desperate for more access, they started repeating those behaviors – things like spinning counterclockwise, rocking from side to side or tossing their heads upwards – that they had been doing the last time food had appeared.

Despite the food access being unaffected by their behavior, these actions continued “as if there were a causal relation between [the] behavior and the presentation of food,” Skinner recorded – in other words, the pigeons had connected certain actions to food access, even though no such pattern really existed.

It may be tempting to laugh at these bird-brained antics, but their behavior was pretty understandable in the circumstances. And besides, if you’ve ever read a little too much into your horoscope, played a certain number on the lottery because you’re sure it’s due to come up soon, or made a wish at 11:11 – well, you’re not much better than those pigeons after all, are you?

Source Link: What Are "Angel Numbers" Like 111, And What Is The Scientific Reason Behind Them?