A new forecast on the state of the app economy indicates the third quarter will see record-breaking revenues spent on apps and games. According to App Annie, consumers worldwide will spend $34 billion on apps and games in Q3, a 20% year-over-year increase on spending. The increase indicates that the Covid-19 pandemic’s impact on consumer habits and behavior is having a lasting effect when it comes to how people are now using apps for entertainment, shopping, work, education, and more.

App Annie, we should note, made headlines last week for having massaged its data in earlier years using confidential sources, then misrepresented this to its trading firm clients as having been statistically modeled with internal controls to prevent such a thing from occurring. This resulted in a $10+ million securities fraud settlement with the SEC, as firms used the data to make investment decisions, as a result.

But App Annie data today still remains a fairly accurate representation of the mobile market, despite these manipulations, and for now is still one of many top companies that supply large app publishers, marketers, and investors with information related to the mobile ecosystem.

The firm said that the largest contributor to app revenue in Q3 continues to be in-game spending and mobile subscriptions — the latter, a focus of lawsuits and increased regulation as both Apple and Google fight to retain their right to a cut of the purchases flowing through their app store platforms. Gaming continues to account for the majority of consumer spend, though non-gaming spending has grown its share over the past few years, thanks to subscriptions.

Android also still continues to outpace iOS on downloads, but the reverse is true when it comes to consumer spending. 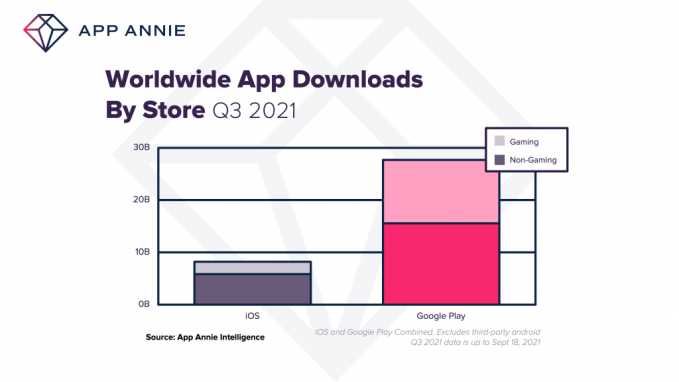 Downloads in Q3 will have grown by 10% year-over-year to reach a record high of 36 billion, driven by Google Play and particularly downloads in emerging markets like India and Brazil. The strongest growth was also seen in Brazil, the Philippines, and Mexico, and the Latin American market has begun to catch the attention of global publishers now, as well, as one with growth potential.

Industries driving download growth include travel, education, and medical — all three of which have had pandemic impacts. Travel app downloads grew 35% quarter-over-quarter on Google Play and 15% on iOS as the summer travel season has picked up amidst widespread vaccine rollout. Medical and education apps, of course, have pandemic ties, as users turned to mobile technology to keep up with online learning and with doctors’ appointments, Covid testing, and vaccine appointments.

But iOS still reigns when it comes to revenue generated by mobile apps, accounting for 65% of app stores’ consumer spending globally, which is in line with the past four quarters.

Consumer spending on iOS apps grew 15% year over year to $22 billion, and 15% year-over-year on Google Play to reach around $12 billion. Most of this revenue is generated by gaming apps, which account for 66% of the spend across both apps stores. In terms of non-gaming apps, iOS commands 76% of consumer spending. Much of the growth outside of gaming, across both platforms, comes from entertainment apps, photo and video apps, social media, and dating apps, the firm says.

While examinations of revenue and downloads have historically helped to paint a broad picture of the state of the mobile economy, as markets mature there’s greater interest in user engagement with apps — like those consumers already have installed on their devices.

A report from an App Annie competitor Sensor Tower, also out today, dives into active users, sessions, and retention metrics for games and non-games alike. The firm found that the top 500 apps worldwide now average 91.7 million monthly active users and this number has grown by 8.4% year-over-year during the second quarter, up from 84.6 million in Q2 2020. 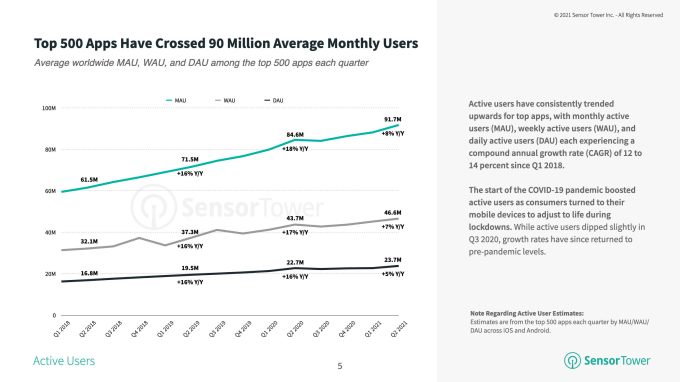 Business apps saw the highest compound annual growth rate (CAGR) between Q1 2018 and Q2 2021, climbing nearly 42% over that time frame, Sensor Tower said. Meanwhile, consumers in Q2 2021 spent the most time in entertainment apps, with each of the top 100 seeing nearly 29 minutes of daily usage, on average. 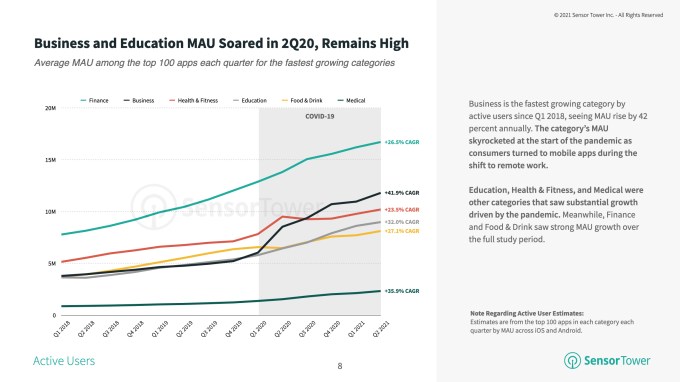 Among games, shooter genre games — like PUBG Mobile and Garena Free Fire  — saw the most daily active users in Q2, as the top 50 games in this genre averaged 7.6 million daily active users. In terms of weekly actives, however, hypercasual games came out on top.

Sensor Tower also credits earlier increases in active users across apps to the Covid-19 pandemic as users who turned to mobile devices during lockdowns. But after a slight dip in Q3 2020, growth in active users has now returned to pre-pandemic levels, it said.