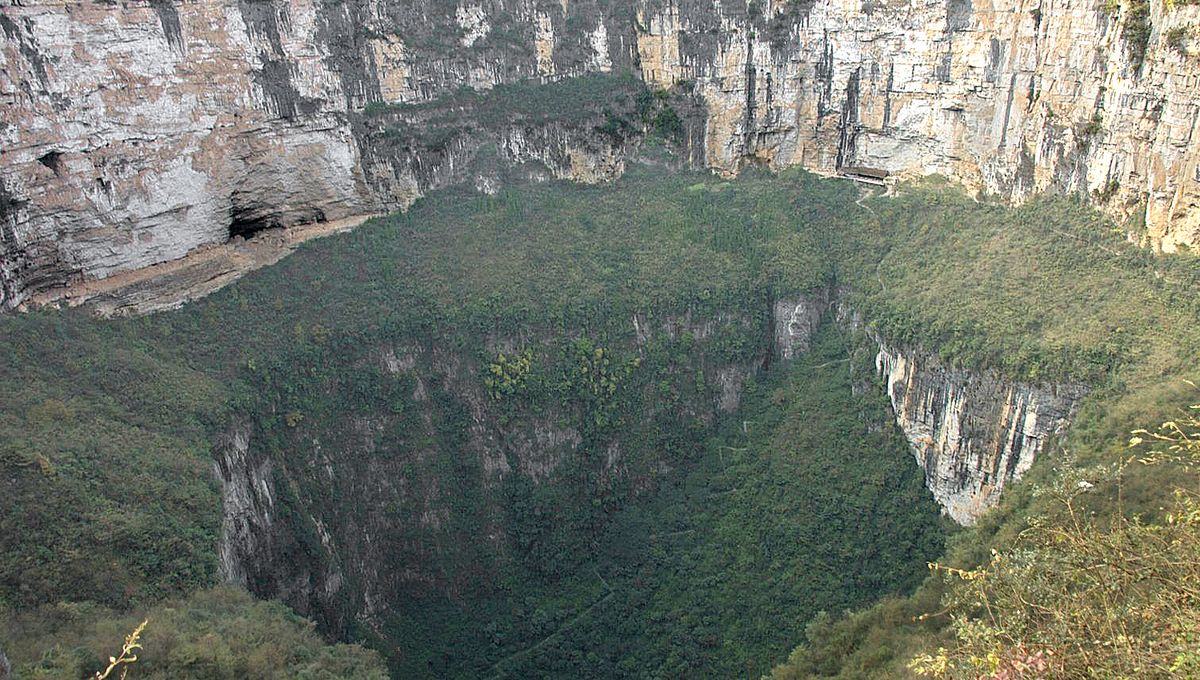 First discovered by specialists in 1994, the world’s deepest sinkhole can be found in Fengjie County, Chongqing Municipality, China. Xiaozhai Tiankeng, or the Xiaozhai Heavenly Pit, measures roughly 537 meters (1,762 feet) in diameter and sinks between 511 and 662 meters (1,667-2,172 feet) into the Earth.

With near vertical walls, the volume of this momentous geological feature is a whopping 119.349 million cubic meters (around 4.2 billion cubic feet). During heavy rains, a waterfall can sometimes be seen cascading down the hole’s steep walls. The structure is double nested, meaning it’s comprised of two distinct “bowls” dissecting it into two layers, with each bowl measuring over 300 meters (984 feet) deep.

The Difeng cave, which the sinkhole sits atop, was formed by a powerful underground river. This river can now be seen in the depths of the pit where it carries clear water through the inner cave systems.

The river runs for approximately 8.5 kilometers (5.3 miles) from the underground Tianjing fissure gorge before reaching daylight at the vertical cliff of the Migong River where the underground water system forms a 46-meter (151-foot) high waterfall.

There are 1,285 species of registered plant in the depths of the Xiaozhai sinkhole, creating its own thriving, unique, and rare ecosystem. Ginkgo biloba, a rare species of tree, can be found living in the pit, as well as rare animal species like the clouded leopard, of which there are estimated to be fewer than 10,000 in the wild.

Found in a large karst area, the sinkhole is comprised of Triassic limestone found in thick pure blocks. It is believed to have formed gradually throughout the last 128,000 years, making it relatively young in age when compared to other sinkholes in the area.

In fact, China is home to a number of sinkholes, referred to generally as “tiankeng”. The word tiankeng means “heavenly pit” or “sky hole” in Chinese, and refers to a very specific group of geological structures.

To be a tiankeng, the sinkhole must be at least 100 meters (328 feet) deep and wide, with a river flowing through the bottom. All tiankeng are comprised of carbonate rock, with the exception of two Venezuelan structures that consist of sandstone. They’re formed through a karst process when their composition is carbonate rock, and a suffusion process when made of sandstone.

The conditions required to form a tiankeng are very specific, making their formation rare. The rock must be above sea level, and be thick with no layers of impurities. Heavy rain is also required to form these structures, which in turn helps form their underground rivers.

Although the term refers to any sinkhole within these criteria, of the 75 identified, 50 of the largest are found in China, hence the Chinese term becoming the commonplace name for such structures.