Tired of swerving around the same pothole every day but don’t know how to report it to your city? Already reported it but feel like said report was fired off into the ether, never to be read much less fixed?

DoNotPay, a company that makes annoying processes less annoying through automation, might be able to help. Their “robot lawyer,” as the company calls it, started out as a service meant to help people more easily fight parking tickets. Over time it’s learned a bunch of new tricks, like helping users end tough-to-cancel subscriptions, get refunds they’re owed and more.

Its latest thing? Helping users report issues like potholes, fallen trees/branches and broken streetlights to their city government — and if said issue damaged your property or cost you money, it’ll help get you paid back.

“It just seems so unfair that if an ordinary American is driving down the street with a broken tail light, the government could give them a ticket and charge them money … but if there’s a pothole in the road, you can’t get money from the government,” says DoNotPay founder Joshua Browder. “So we’ve decided to create a product that is like a fix-it ticket for the government.”

When you start the process of reporting a city issue with DoNotPay, you’re given two options: report the issue or claim compensation. The first finds the correct place to report an issue in your city, then their chatbot gathers all the info it needs and sends it over to the city with your contact info. The second walks you through the small claims court process; their robot lawyer can’t represent you, but it’ll generate the documents you need and try to tell you everything you need to know to make your case.

DoNotPay started out as something of a side project but quickly grew into something more.

“When I was studying at Stanford, I got a bunch of parking tickets,” Browder tells me. “I learned … I was a terrible driver. But I also learned that the government issues tickets to make money, not necessarily to punish people. So I created the first version for fun — to help myself and my friends. Within two days of creating it, one of my friends posted it on reddit and it went completely viral internationally. I went from 10 cases on day one to like … 50,000. All this made me realize that this is bigger than just a side project. It really taps into what people hate: being ripped off. So I’ve decided to devote all my time to pursuing that over the past six years.”

Browder tells me these new reporting features are live now, currently work in the top 50-or-so biggest US cities, and are included in DoNotPay’s standard subscription price ($36 for three months.) 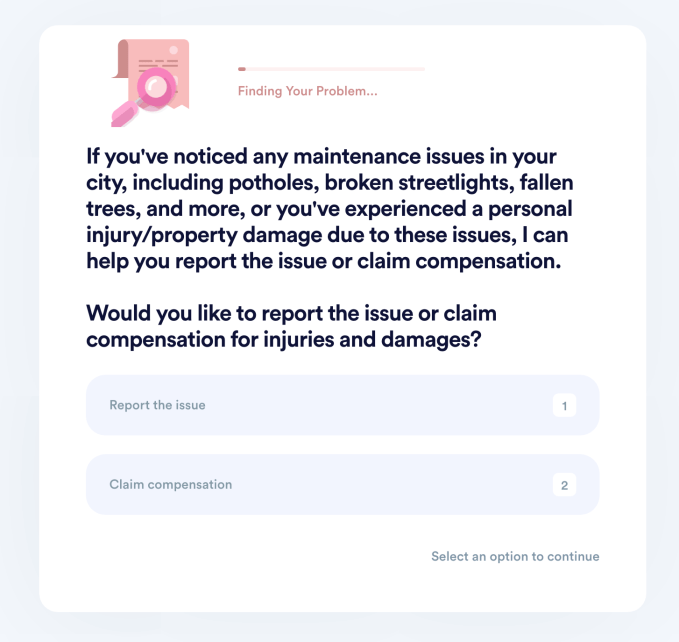