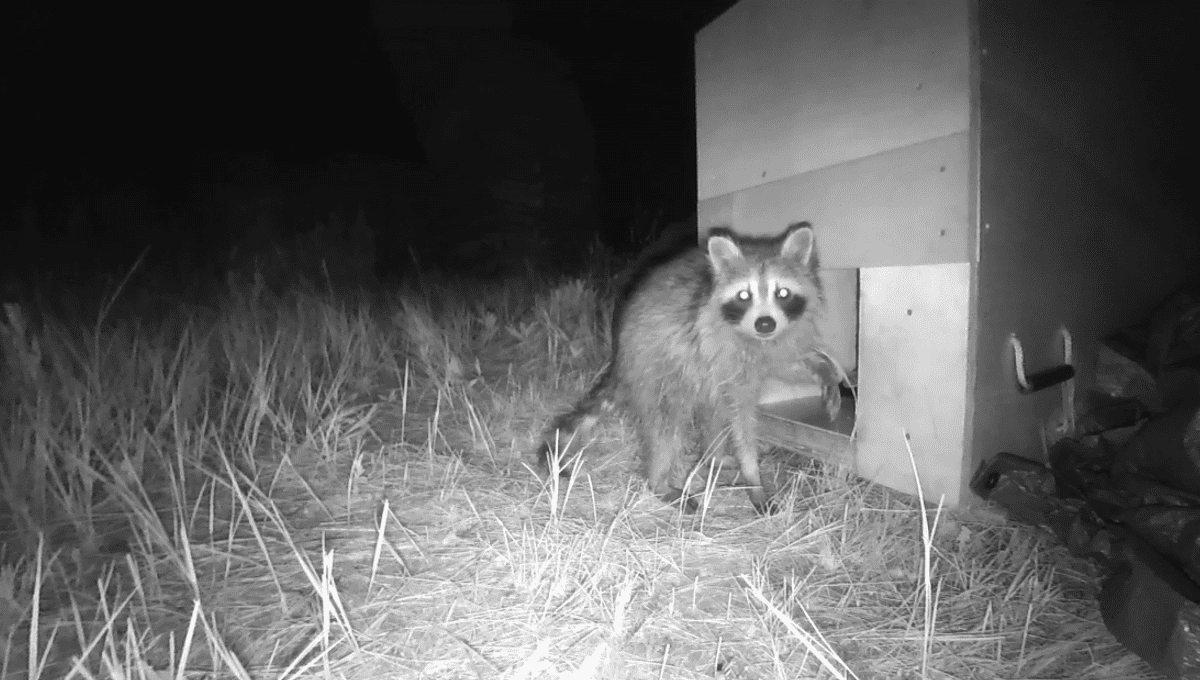 The humble raccoon was practically built for a life of crime, having evolved a bandit mask to give the Hamburglar a run for his money. Famous for raiding bins and breaking into banks, these animals are well versed in navigating city life – but new research has found that when it comes to nailing the more criminal culprits, it’s not the bold raccoons you need to worry about.

Wanting to get inside the mind of a city-dwelling heist artist of non-human origin, researcher Lauren Stanton from the University of California, Berkeley, USA, went in search of raccoons. Through her research, she hoped to pin down the cognitive capabilities that come in handy for urban wildlife and determine if they’re correlated with specific types of behavior.

Using live traps baited with cat food, Stanton and colleagues were able to humanely capture raccoons living in the city of Laramie, Wyoming. The fluffy bandits were transported back to their lab and given a health screening before being assessed for how feisty or docile they appeared.

Temperatures and temperaments taken; each raccoon was injected between the shoulder blades with a miniature radio frequency ID tag so the team could keep track of each individual’s movements. They then let them back into their home territories – but science wasn’t done with them yet.

The researchers lay further humane traps which, appealing to the raccoon’s thieving nature, could indicate their impulsivity in feeding back to the team how many times each raccoon was caught. For four years they monitored 204 raccoons in this way, and then came the real challenge.

Raccoons were invited to take on their own version of The Cube, being presented with a box inside which they were tasked with completing a challenge in order to earn dog treats. The skill? The ability to flick the correct switch. If you’re thinking “that sounds awfully simple,” please be reminded: we’re talking about raccoons.

An unforeseen consequence of the raccoon challenge pods was the false assumption that they would attend in an organized fashion. On occasion, the raccoon boxes’ popularity made them madder than a box of frogs as multiple animals bumped and shook the container while one poor animal tried to figure out the task.

Fortunately, not all test sessions descended into complete chaos and the team was still able to gather data on which animals were the quickest to work it out. Then, to put their cognitive capabilities even further to the test, the researchers flipped which switch released the reward.

The results revealed that after two years, 27 raccoons mastered The Cube. Of those in attendance, 19 figured out which switch would earn them delicious biscuits, and 17 navigated the flipping of the switches. Finally, came the grand reveal…

When matching up the masterminds of The Cube to their emotional temperaments, it appeared to be the case that the quieter raccoons were the most cunning. This, Stanton says, could suggest that cognitive capabilities in raccoons are linked to emotional reactivity.

It could also indicate that when it comes to keeping these fluffy bandits out of bins and banks, going after the brashest, boldest raccoons might actually make things worse, as you leave behind the calm and collected true criminal masterminds.

Like they say, it’s always the ones you least expect.

The paper is published in the Journal of Experimental Biology.

Source Link: Quieter Raccoons Make For The Most Cunning Trash Can Criminals